US elections to influence the energy landscape

With less than a month until the presidential election in the United States, the candidates’ energy strategies do not seem a campaign priority. The Democratic candidate Hillary Clinton and the Republican candidate Donald Trump lay out different – unrealistic – energy policies. Will the balance of Trump versus Clinton weigh on the scales of fossil fuels versus renewables?

Donald Trump aligns his energy policy with his plan to “make America great again”. In his “America First Energy Plan”, the Republican candidate calls for a strategic dominance of America’s energy platform. In his speech in North Dakota on May 26, Trump proclaimed: “We have no idea how rich we are. We want to cherish that wealth”. The American energy dominance will also be declared a foreign policy goal, Trump promises. He declares that a positive relationship with Gulf allies will be developed as part of the antiterrorism strategy.

Clinton on the other hand puts forward an idealistic and detailed plan with ambitious goals to be achieved within 10 years of taking office. She promises to deliver on Obama’s pledge to join the Paris Climate Agreement and vows to implement renewable energy in both regulations and projects. For example, Clinton optimistically promises to power every home in America with renewable energy within a decade. However, the lack of a solid financial plan to back up these ideological ideas make Clinton’s ideas seem like promises made out of thin air.

As of 2014, the U.S. Energy Information Administration (EIA) estimated that the recoverable coal reserves in the U.S. exceed 19 billion short tons, a unit of weight commonly used in the United states. McKinsey & Company reported the highest-ever profitability peak of the U.S. coal industry as recently as 2011. However, the steep decrease in domestic thermal-coal demand and the lack of global interest in coal, have caused the demand to fall by 19% per year as of the end of 2014. The coal industry is facing a crisis mainly due to overcapacity.

Clinton sees this crisis as an opportunity to shift towards more renewable energy sources. She promises to repurpose mine lands. Mrs. Clinton announced a 30-billion-dollar plan to ensure the well-being of coal miners and their families. Trump’s vision opposes Clinton’s: he aims to save the coal industry.

Nevertheless, Trump also promises to boost the energy dominance of the untapped oil and gas reserves. The Republican candidate supports the building of the controversial Keystone pipeline that would connect the oil fields in Alberta (Canada) with the United States. Clinton has changed her opinion on the Keystone project, supporting the project in 2010 but opposing it in her campaign as of 2015.

In the pursuit of energy independence, Trump explains that the drilling of oil and the exploitation of gas reserves should be intensified. Fracking, the injection of a liquid under high pressure to crack rocks to assure the free flow of natural gas and petroleum, plays an important role in this independence. The EIA assesses the reserves of shale gas around 199.8 trillion cubic feet, or about 51.8 % of the total natural gas reserves in the USA. Due to its environmental side-effects, many countries forbid fracking. Looking at the untapped potential, Trump supports a further extraction of shale gas. Clinton on the other hand intends to implement stricter fracking regulations. She detailed her position during the debate on March 6 in Flint, Michigan: ‘I don’t support it when any locality or any state is against it, I don’t support it when the release of methane or contamination of water is present. I don’t support it unless we can require that anybody who fracks has to tell us exactly what chemicals they are using’. This leaves almost no American soil to be exploited.

As Clinton tends to move away from coal and has avoided taking a position on oil, she fully shifts her policy towards renewables. The Democratic presidential candidate announced an ambitious Clean Power Plan, which is meant to make America the world’s clean energy superpower. While Mrs. Clinton will try to accelerate the deployment of renewable natural gas and low carbon solutions, Trump gives free rein to all kinds of renewables, while not excluding coal nor other fossil fuels. A promise meant to please all.

President Obama declared on the 3rd of September that the USA will ratify the Paris climate change agreements. A turning point in the fight on climate change.

The announcement of the clean power plan in 2015 marks the beginning of an effort to reduce carbon pollution from power plants. Clinton strongly supports this initiative and takes it further. Within 10 years of taking office, there will be enough renewable energy generation to power every single household in America. The energy waste will be cut by a third, and a third of the current oil consumption will be replaced by cleaner options such as biofuels.  To create enough energy to power every single household, the capacity of renewable generation should be 2,5 times bigger than the capacity in 2014. This means the extra generation of around 830 TWh, 13 times the net energy production of Belgium. 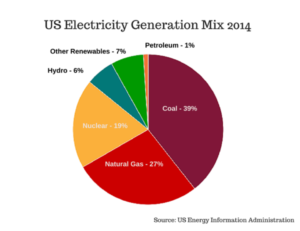 The implementation of a clean energy challenge, the modernisation of the existing transmission grid and a reformation of the tax subsidies contribute to a more sustainable energy plan. This would be sufficient to reduce the greenhouse gas emissions by 30% relative to 2005 and by 80% in 2050, Clinton estimates. However, questions arise about the financing of these projects. Without putting a price or taxation on carbon dioxide emissions, all the funding should come from a public budget. According to David Victor, director of the Laboratory on International Law and Regulation at the University of California, this is nearly impossible.

Opposite to Mrs. Clinton clear ideas and elaborate proposals, stands the unclear energy plan of Mr. Trump. Focusing on America’s economic supremacy, Trump aims to cancel the US participation in the Paris Climate Agreement and stop all payments of the US tax dollars to the U.N. global warming programs. Although such thing is highly unlikely, says Christiana Figueres, UN’s climate chief, it indicates Trump’s vision on climate problems. Together with a rescind of the Climate Action Plan and the Waters of the U.S. rule introduced by president Obama, Trump will focus on ‘real environmental problems like clean and safe drinking water’.

November 8, the day of the American presidential election, will not only be a choice between a Democratic or a Republican president; it will also shake up the energy landscape in the coming 4 years. Can we expect an accelerated plan towards clean and sustainable energy under Clinton, or will we observe an intensified exploitation of fossils under Trump’s policy? In this crucial decade for the transition towards a sustainable future, the latter would put a severe damper on the world’s ambition to transition to a sustainable future. Whatever the outcome of the US presidential elections is, it is clear that the debate on energy is far from over.